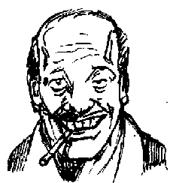 Call me "Burnt Man." I, van Stang, just returned from Burning Man 2000, where I attained such heights of pure unbesmirched Slack that it will surely take several days to recover, much less to finish describing it and mounting the insane photos taken by myself and my Burning Man companions (Dr. Philo "Ranger Philo" Drummond, Dr. Ray Hay, Dr. Howll and Puzzling Evidence aka Ranger Coyote). We met with many high muck-amoks, mounted the 7x7 foot Dobbshead on a 40' high scaffold for all to see, projected the new metal "Whyaskwhy Dobbshead" on a gigantic shadow-screen, appeared on Chuck Cirino's Black Rock City Talk Show TV Show, and spent much time cruising the Playa on St. Pepper's Motorized Living Room art car. We only signed up one new Member, though (Rev. John Shirley's son Julian.). A very high percentage of Burning Man attendees are already dues-paying SubGeniuses!

For SubGenii who may not yet be familiar with the phenomenon known as Burning Man, it's exactly like our hedonistic X-Day Drills, multiplied by a factor of about 100 (minus the Dobbsheads). And it's in the middle of the Black Rock Desert in Nevada, instead of Brushwood campground in New York state. And they're not ALL SubGenii. See http://www.burningman.com for their details. Our cameras and brains have JUST come back from the repair shop. They survived a blistering dust storm, immediately followed by a freezing rain storm, but were finally ruined in a naked breast storm. 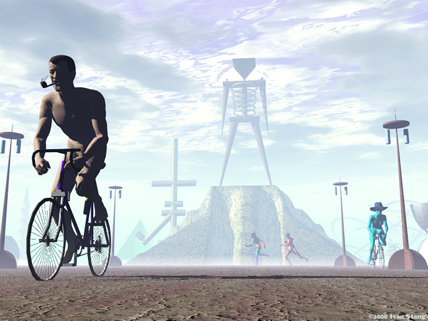 I am still in the process of writing up our adventures, in the form of captions for all these photos, hopefully, but in the meantime, BOY HOWDY HELL FIRE IT, we have PICTURES!! Burning Man is a voyeuristic photo-bug's dream com true. So far you only have two choices, though:

Burning Man 2000 as seen through the high res digital eyeballs of
DR. PHILO DRUMMOND
(including rare shots of "BOB" at BM2K!!)

This has been changed from the HUGE stash of HUGE files to a much editted, less demanding single page, with the pictures tweaked and twiddled for the Web.